As the temperature increases, we are headed out on more adventures. Recently, we spent the day in Boone County

We decided to explore our state and Visit Boone County Kentucky! 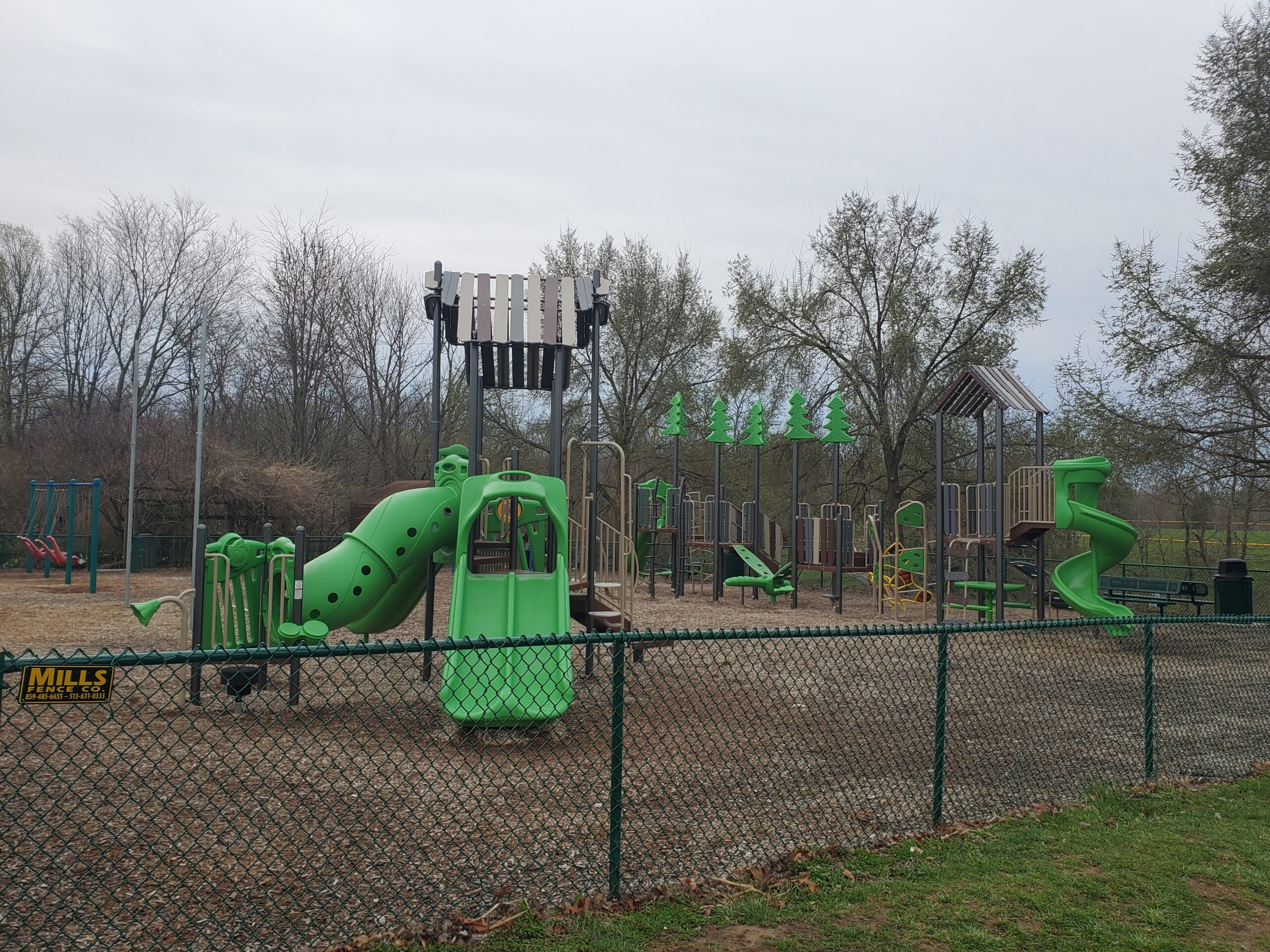 At the Arboretum, there are 12 athletic fields that are surrounded by a winding, paved trail over two miles long. The Saturday we were there, it was crazy busy with baseball and soccer games. There are occasional unpaved paths and bridges in the grassy areas, and some paved trails off of the main paved trail, but it’s generally an easy path to follow. It’s great for strollers, wagons, and wheelchairs.

There is also a Children’s Garden, butterfly Garden, and vegetable garden. There were also about 20 story book trail signs to read and perform along the 2 mile trail which was really fun. 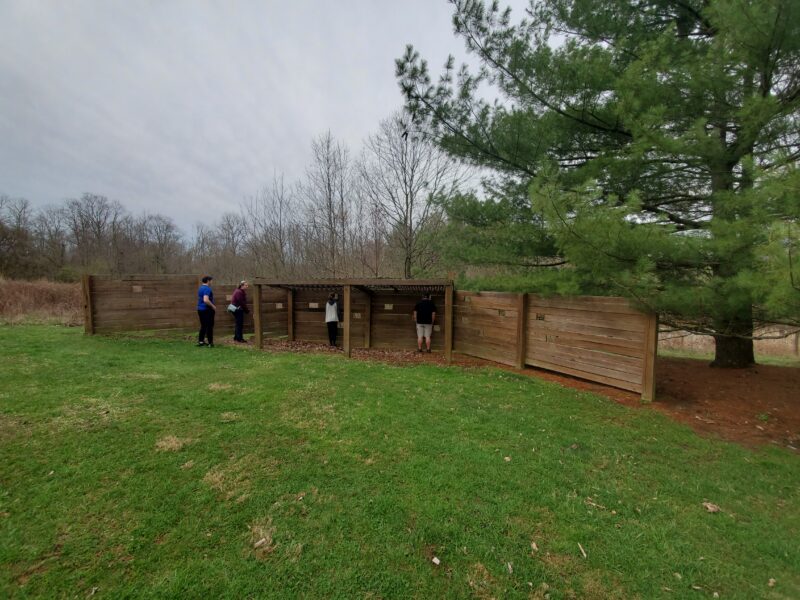 Pets are welcome in most areas of the Arboretum, as long as they are on a leash and picked up after. We saw quite a few dogs. There were also nice bathrooms at the entrance to the Arboretum which were clean and stocked. 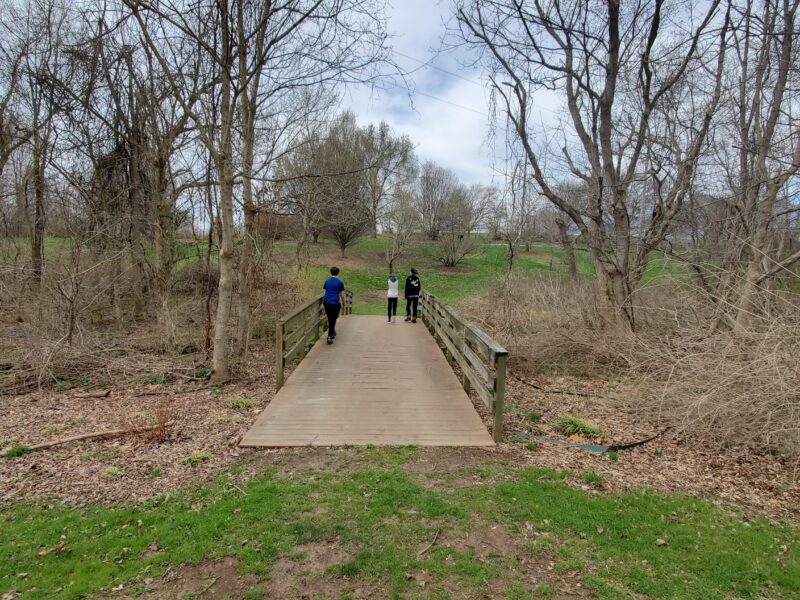 The Boone County Arboretum is Accredited at Level IV (the highest level) by the Arbnet Accreditation Program, a recognition held by very few other arboreta in the region. I recommend parking by the playground, picking up a map by the entrance, and checking out all the types of trees along the trails. 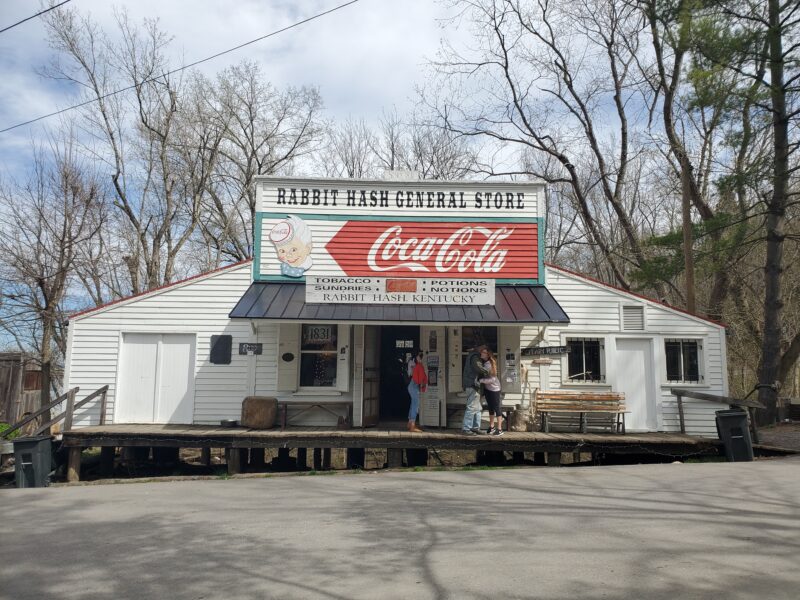 Our next stop was the little town of Rabbit Hash.
Rabbit Hash is about 90 minutes from Louisville, and it’s a beautiful drive – probably why we saw so many motorcycles there. 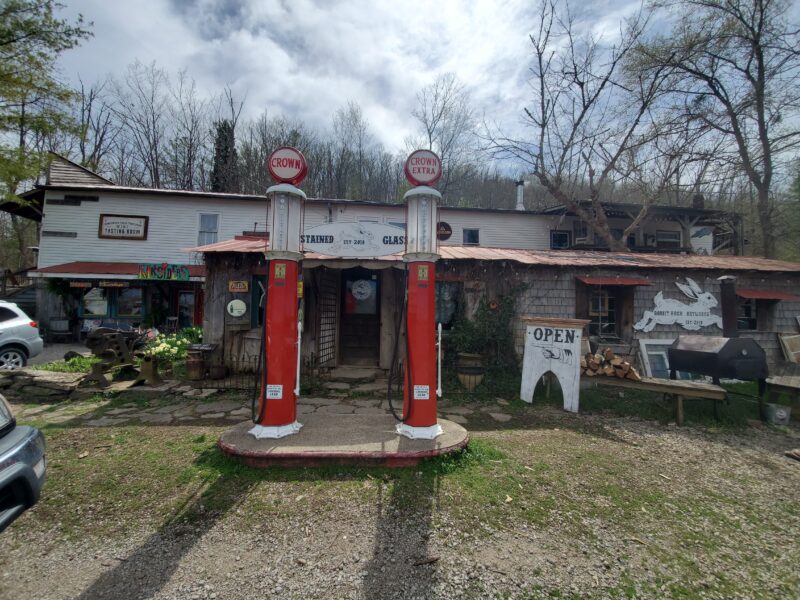 Rabbit Hash has had a dog for a Mayor since 1998. The current mayor is a French bulldog named Wilbur Beast. (The amount of Facebook pictures on Wilbur’s FB page since he took office in 2020 rivals the number of pictures I took of my 1st born child – he is very popular, well spoken, and well cared for). Wilbur is also quick to respond to FB messaging if you want to ask if he’ll be in town for your visit. 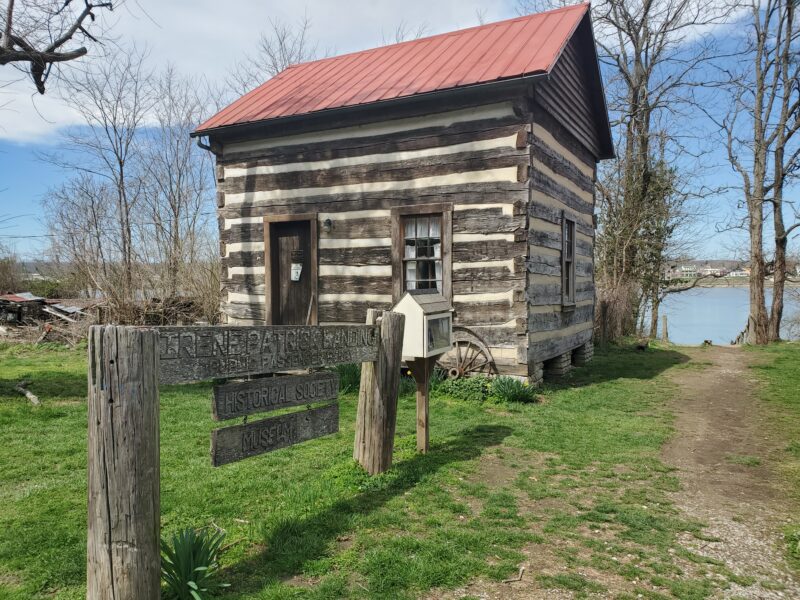 Rabbit Hash is made up of about five square miles, and has a population of about 315 people. The town is owned by the historical society. The Historical Society rents out their buildings to business owners, so there is never two of any type of business in town. The historical society also runs the visitor’s center in a restored log cabin, which is open by appointment in warmer months. 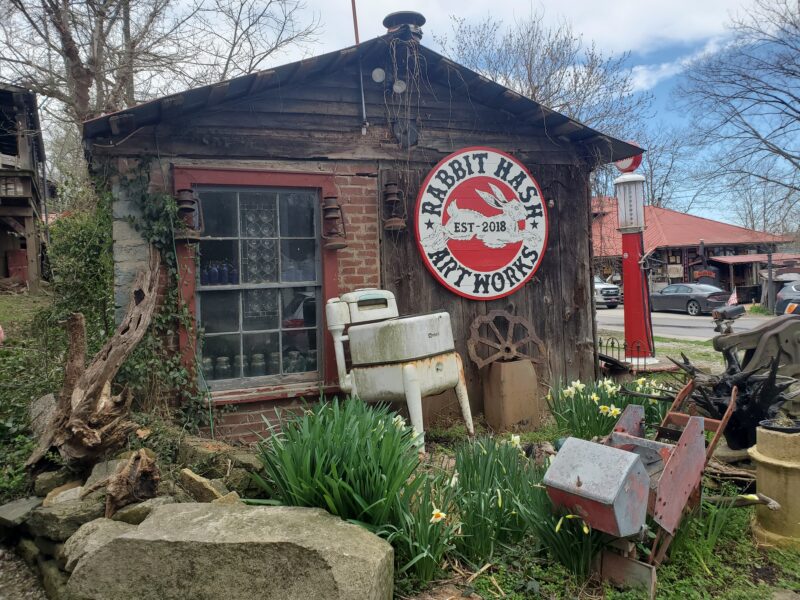 The General Store has been open since 1831, and before a fire in 2016, it was considered the most well known and best preserved country store in the state. It has since been restored to its original state as much as possible. You’ll love the antiques on the walls, the wood stove in the center of the store, and the porch swing inside the store. If the Mayor is in town, he’s probably hanging out at the General Store. 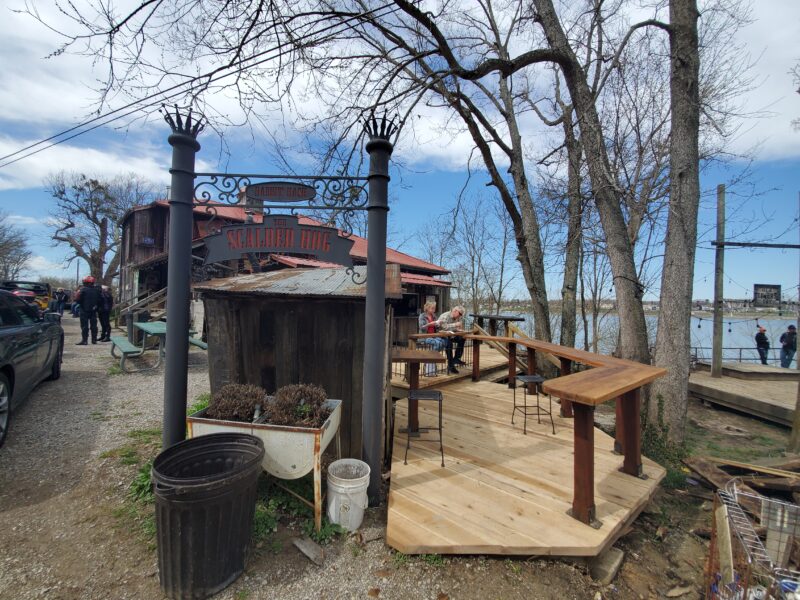 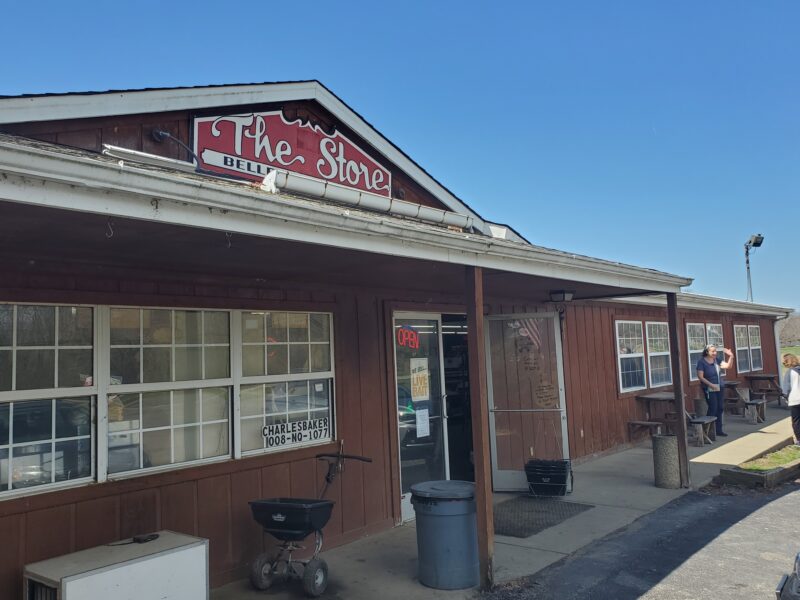 If you’re looking for a meal while visiting Rabbit Hash, the Scalded Hog (barbecue restaurant/stand) is in town. If it’s busy, you may want to go up the road to “The Store, Belleview Grocery,” just outside town. Their potato soup is DELICIOUS. 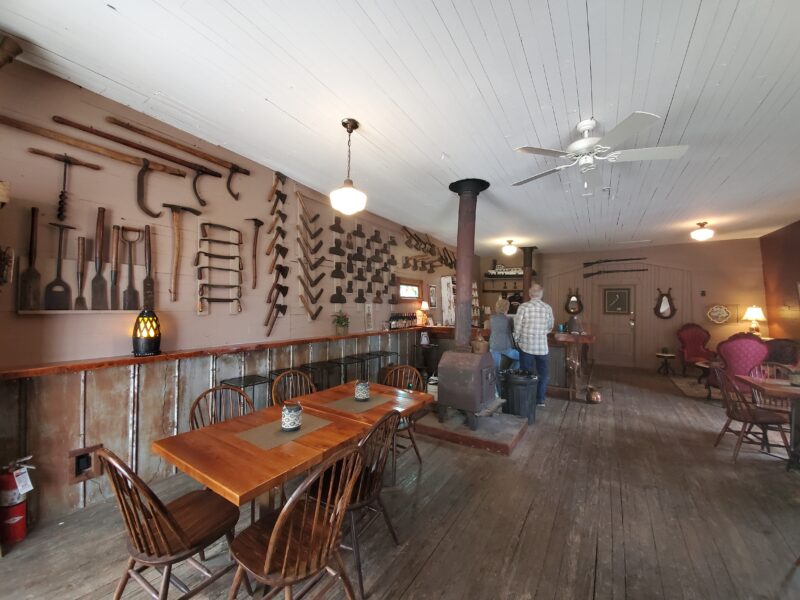 Verona Vineyards Wine Tasting Room is such a neat atmosphere, but only those 21 and over can go in. There’s a nice outdoor seating area right outside. Below it is Folksiders – a really cute shop with really interesting merchandise. Next to that building is Rabbit Hash Art Works. I really want to go back and buy some stained glass! 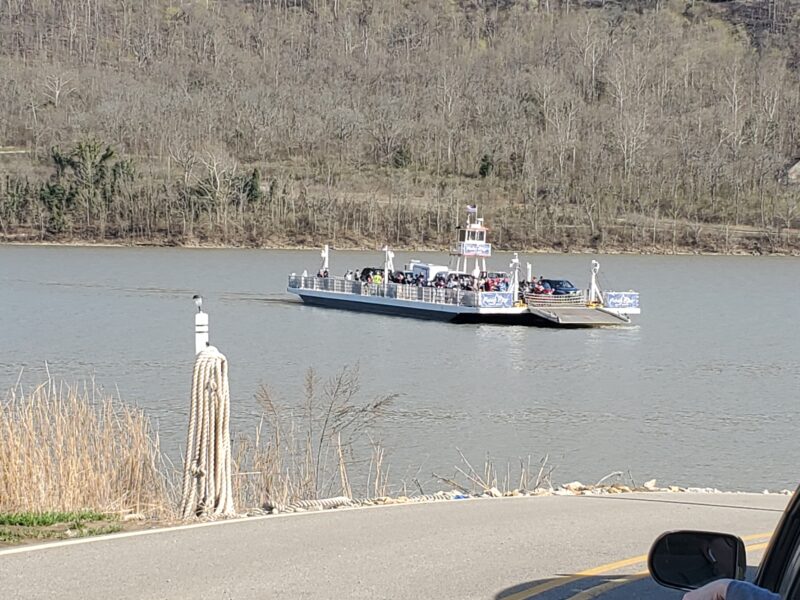 Next on our Visit Boone County Kentucky list was the Rising Star Casino Ferry – also referred to as the Rabbit Hash Ferry and “MS Lucky Lady.” 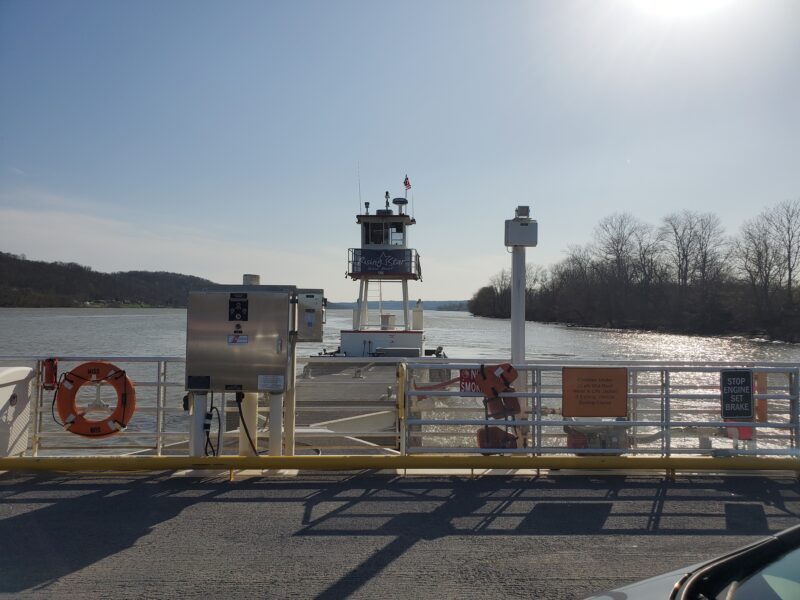 MS Lucky Lady is a custom-built, top of the line tug and barge ferry that was built specifically for Rising Star Casino in 2018. Originally there was a ferry that operated between Rising Sun, Indiana and Rabbit Hash, Kentucky from the early 1800’s until 1948. At the time, it was just one of the many ferries along the Ohio River, most of which have been replaced by bridges. Rising Sun and Rabbit Hash, however, are only 2,000 feet apart, so Rising Star’s MS Lucky Lady brings these two neighboring communities back together. 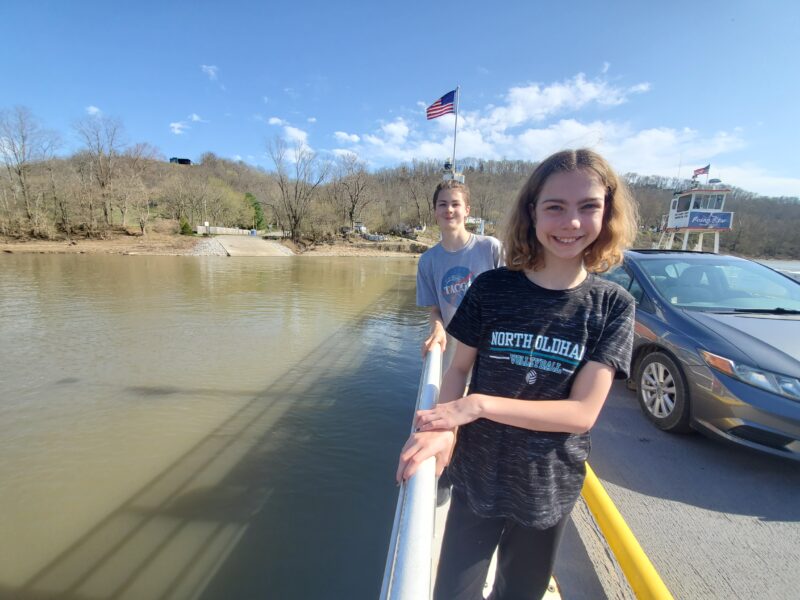 For only $5 (cash only), you and your vehicle can cross the Ohio River from Rabbit Hash to Indiana.
From there, you can visit a few Indiana attractions, or just turn around and ride the ferry back. You can also take the ferry to Indiana at the end of your day, and head back to Louisville from there – it’s only a few extra minutes added to your trip home. 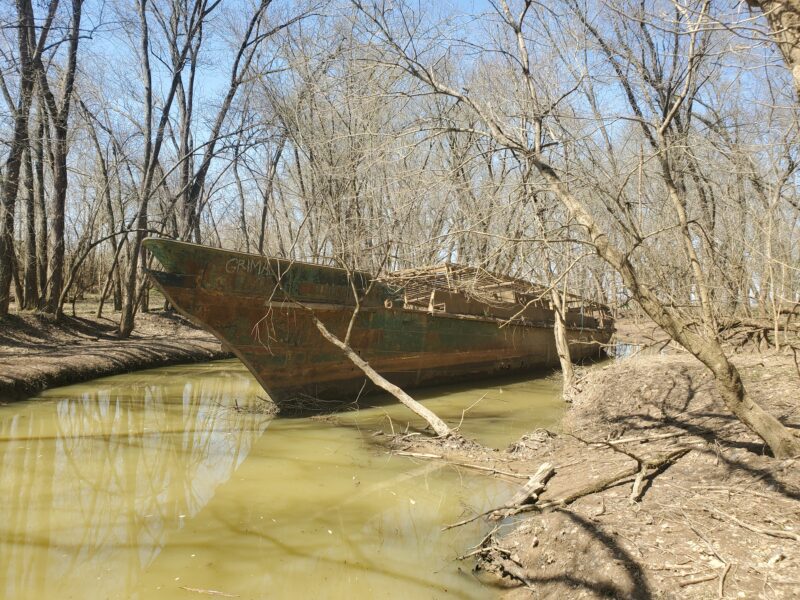 For our last stop to visit Boone County Kentucky, we headed up to the ghost ship: the USS Sachem Ruins.
The USS Sachem is a 186 foot long, steam powered ship, first launched in 1902. This boat is super cool with an amazing history. Initially a railroad mogul’s luxury boat in 1902, then used as a Navy ship in WWI, used by Thomas Edison for experiments, then a fishing boat in New York. Put back into use by the Navy for WWll, then a cruise line ship present for the re-lighting of the Statue of Liberty’s torch, and then used as Madonna’s backdrop for her “Papa Don’t Preach” video. This ship was then navigated down the Mississippi to this tributary off the Ohio River where she was anchored with the intention of restoration, but has been left to rust since 1987.

You can see the ship from Lawrenceburg Ferry Road, but it’s even better to check it out from a kayak (check out Tanners Creek in Lawrenceburg, IN). 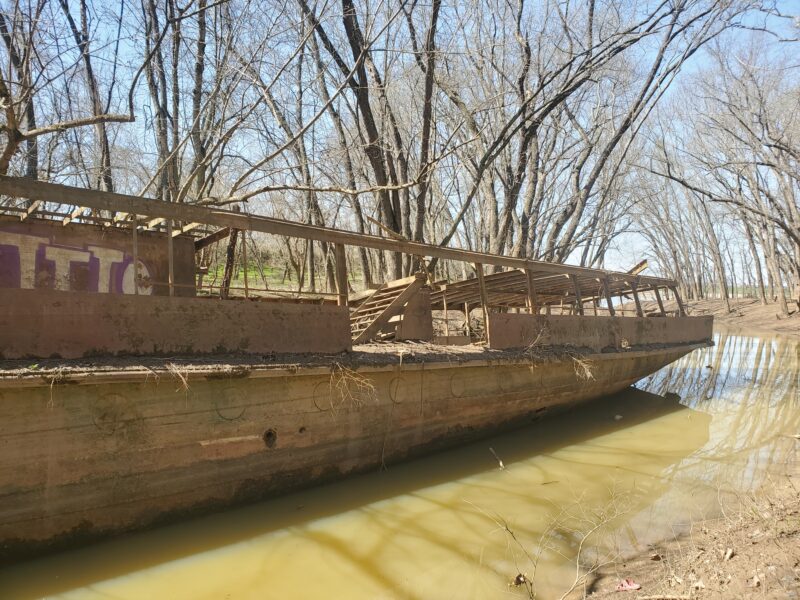 I know we don’t need to tell OUR readers this, but please don’t try to go on the boat, graffiti the boat, or leave litter around the boat. When people do these things, we lose the privilege of viewing such amazing things. 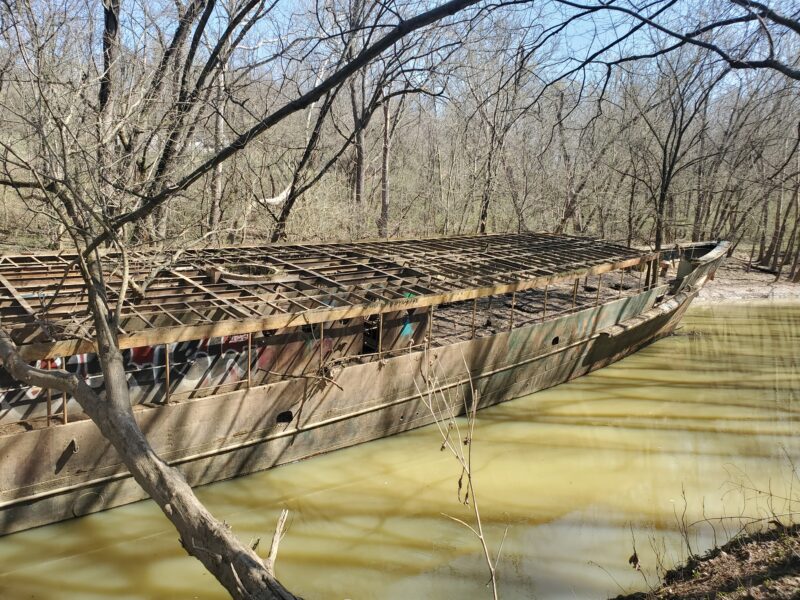 On the way home, we passed the entrance to Big Bone Lick State Park which is also in Boone County. Going to visit the bison and read about the mammoths that used to roam that land would be a great addition to a Boone County day.

It was a great day to visit another part of Kentucky. We are so fortunate to have all of these amazing places in our own state. Take time to enjoy where we live. 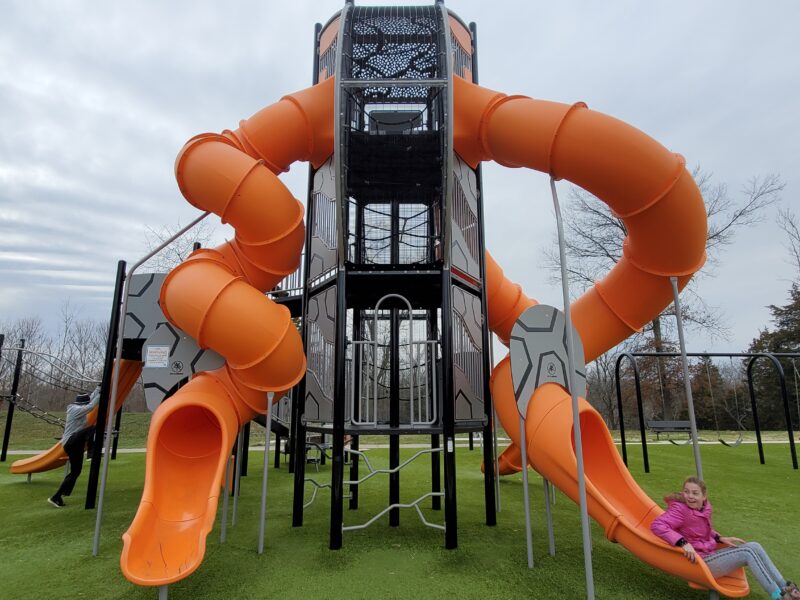 Other nearby things to do:

From your ferry ride over to Indiana, you can visit a few Indiana attractions:
The Red Wolf Sanctuary in Rising Sun. They are open for tours by appointment only, and have been closed during Covid.

Hillforest House Museum is a stately, Victorian House Museum from 1855. This Italian Renaissance mansion is just blocks from the river in Aurora, Indiana. 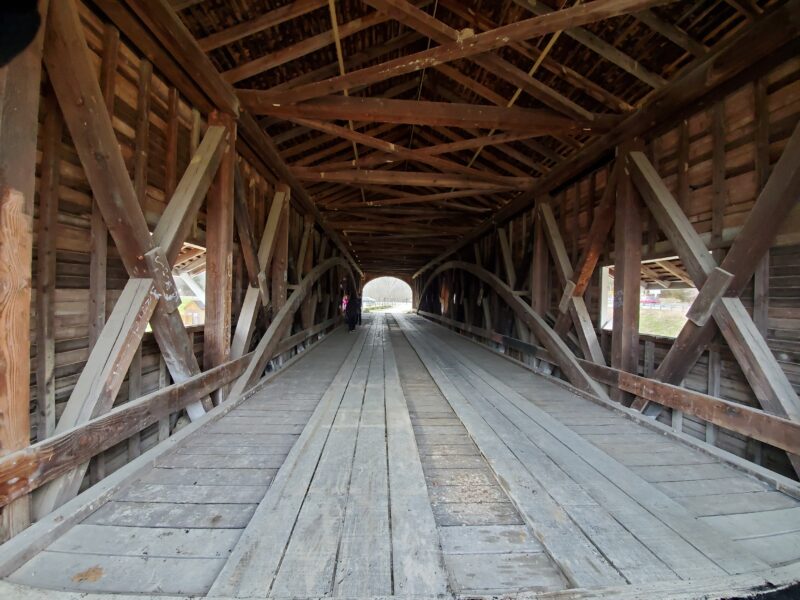